Life Lessons From Flipping the Birdie With Coach Goldie 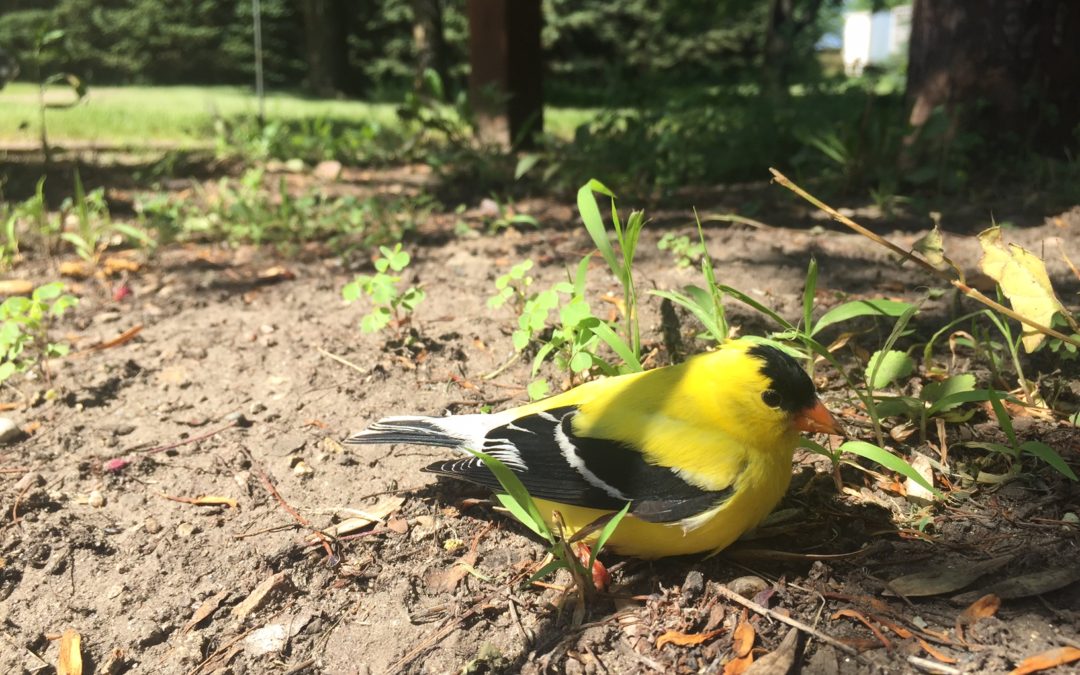 Today I had the most interesting thing happen while I was writing at my desk.

This sweet little goldfinch flew up and hit my office window. It was so sad!

Immediately she (her name is Goldie) fell to the ground. Stunned. She was gasping for air. I didn’t know what to do!

The chiropractor in me began to assess her nervous system in my mind. I thought, ‘How can I possibly adjust this little creature?”

I thought she was dying. The little girl in me made a desperate phone call to my boyfriend, Pablo, for help. He came running to see what was happening.

I quickly debriefed him, and we both sighed out loud with somewhat hopeless anticipation. Tears began to well up in my eyes.

Then the coach in me thought this…

After helplessly watching her gasp for air while lying on the cement, completely still, I decided it was time to take action. Yes, I had been praying for her, but as I continued to pray, I got up and did what any great coach would do…I asked her for permission to help her get up and fly!

We grabbed a small shovel and carefully attempted to lift her up while not moving her head (yes, the chiropractor in me kicked in again – I’m thinking…”Immobilize her neck, her spinal cord could be in jeopardy!”)

All of a sudden, she flew straight up and, although a little wobbly, landed under a tree. We were so surprised and happy to see that she still had enough life in her to allow her to fly! And even though she had been knocked down (flat on her back), she did what she was designed to do…no matter what…she flew! Yay!!

When we went over to see if she was okay, she looked as surprised as we did! (She had to be thinking, “WOW…I didn’t know I had that in me!”)

She sat there quietly and supernaturally calm, as if she was gathering her wits and assessing all her options.

Once again, the coach in me thought this…

We gave her the time and space she needed.

I kept checking in on her, but still no change. She continued to seem peaceful and unafraid, even when I took the “Birdie” (aka: Bird Selfie)

About an hour later, Pablo checked on her, and noticed that she was eating. Yay!!! She decided, “If I’m going fly, then I’m going to need some fuel for the journey.” (SMART BIRD!)

As he was about to take another pic, she suddenly flew off like a BIG BIRD and did so with no trouble at all!

We were SO HAPPY!! We celebrated and thanked God for this sweet little miracle!

Once again, the coach in me thought this…

Lack of clarity can leave us stunned, dazed and confused. In fact, sometimes it can cause us to do things that knock us off our feet and flat on our backs.

Sometimes it hurts so much that we (and others) wonder if we’re going to make it.

But if we take the steps necessary to receive the help we need, rest, and remember WHO AND WHAT WE ARE, we can get clear.

Once clear we’ll know what to do next to fuel our journey well, so WE CAN FLY WELL!!!

Just because we get knocked down, doesn’t mean we quit doing what we’re created to do!!

A WHOLE NEW PERSPECTIVE AWAITS. Once we get up and off the ground everything seems so crystal clear again!!

Thanks for the lesson, Coach Goldie!!! We wish you well!!